The Snap Partner Summit (SPS) is next week on April 28th. Last year they announced their new Spectacles and Lens Studio 4. We can expect Lens Studio 5 to be announced at SPS this year and I have a few predictions of what to expect. I'll clarify that I have no insider knowledge and have not had access to any betas, these are just my guesses as to what comes next for Lens Studio.

I'm sure there'll also be some update or big spiel about Spectacles and about how great they are. They seem cool for like the 2 people in the world who have them. Maybe they'll announce that they are available for purchase now.

Snap is also rolling out revenue sharing for story ads. It's already been announced, but I'm betting Snap will brag about it during SPS and possibly roll it out to more creators. So why is this in its own section vs in the SPS section? That's because it is rant time.

Snap paid out $250 million USD to creators for Spotlight videos. Some of these lucky creators used my lenses to make viral videos that most definitely earned them some money. But Snap paid me $0. And I'm not alone, lots of lens creators experienced this. Snap could not find any room in their $250 million budget to pay the lens creators who helped users create fun and engaging Spotlight videos. The Lens Studio team tried their best to compensate us in some way for our lenses being used on Spotlight, but the Spotlight team gave us the middle finger.

Now we have story ads. If I were a betting man, I would bet money that Snap is going to recommend creators use lenses to create more engaging stories to earn more ad revenue. But are the lens creators going to get any part of that? I'd love to say we will, but based off past experience, I think it's pretty likely we won't get anything. I really hope I'm wrong.

Ranting about Snap's lack of support for lens creators isn't all I do, I also have regular talks with Snap to try and figure out a path to allow lens creators to earn something for their work. I hope my rants motivate other creators to talk to their platform of choice and get the conversation started as well. AR lenses and filters are helping Snapchat, Instagram, and TikTok grow; we do deserve some credit and hopefully will be recognized and rewarded for our efforts. 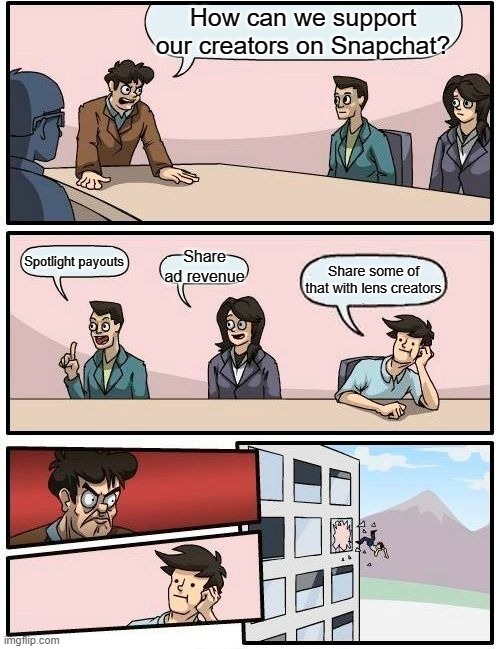 Also in recent news TikTok's Effect House is now in public beta! It looks a lot like Lens Studio and Spark AR had a baby, although maybe more on the Spark AR side of things. If you are an AR creator you should definitely check it out.

If you do check out Effect House, you'll notice it is Mac only right now. I guess it is in beta, but still. Last I checked there is no public information about when a Windows version of Effect House is coming, but I joined the Effect House Discord channel and found that it is coming "sometime later this year." That could be in two weeks or it could be in seven months. I really wish they'd put that on the website rather than making me dig through a Discord channel, but at least they said something about the ETA.