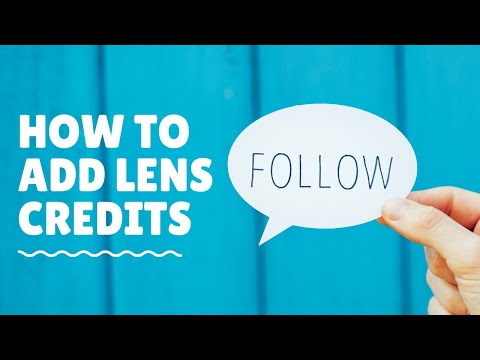 In this tutorial we'll go over how to add credits to your lens/filter. Adding credits or a call-to-action to your lens could potentially help you grow your subscriber base or credit another creator with whom you've collaborated, but you don't want it to be obtrusive. Here you'll learn how to fade out the credits after several seconds and also ensure it never shows up while the user is taking a picture or video.

When you added the Screen Text, you may have noticed that it was nested underneath a Full Frame Region. Select this frame region, and then over in the Inspector Panel change the Screen Region from Full Frame to Safe Render. Why? Well, the Snapchat interface will cover up parts of the top and bottom of the screen. The Safe Render region makes sure our content is not covered by the Snapchat UI. Once that is done, go ahead and edit your text. You can change the font, the size, the position, etc.

Our first task will be to make sure our lens credits are never visible while the user is taking a picture or video. For that we will use the Behavior script. Select the Credits script object in the Objects Panel so that the script options are visible in the Inspector Panel.

We'll still be adding the fade-out effect, but this behavior script makes sure that if the user takes a snap before the credits have faded out that they aren't present in the captured image/video. 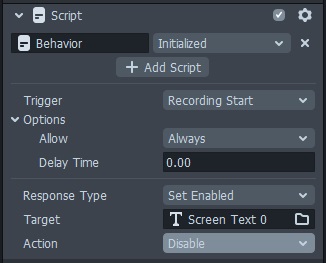 Fading out with tweens

What is a tween? If we were normal people we'd be referring to a pre-teen, but since we are making lenses, it means something else. Tweening is short for 'inbetweening.' We have a start value and an end value and the tween script will take care of calculating all the inbetween values. These could be position, rotation, or scale values, but in our case we are going to use alpha (transparency) values.

A fun example to try would be a Time value of 0.3, a Delay of 3.0, and an Easing Function of Bounce. This gives a nice flickering out effect, but feel free to try out different easing functions, times, and delays to find what suits your lens best. 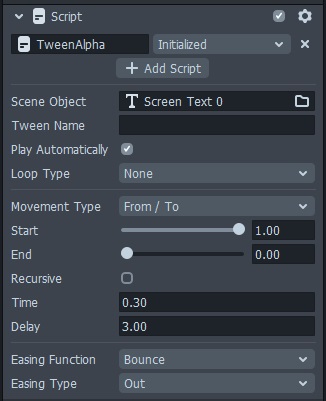