Add a sharpening or "alt" effect to your Snapchat lenses 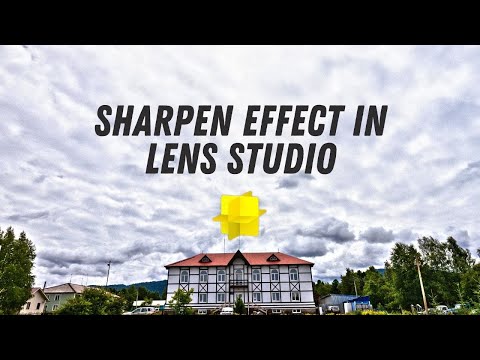 In this tutorial we'll go over how to create a sharpening effect in Lens Studio (sometimes called "alt" by the cool kids). When used subtly it sharpens the image, and when used prominently you achieve a more HDR look to your lens. You can preview this effect by clicking here or by scanning the snapcode below.

The inspiration for this effect comes from an article on creating a face smoothing effect, but instead of smoothing out the details we are going to enhance them.

This sharpen effect is fairly simple to create and add to your lens. Because we added it as a Post Effect, anything you've added to your scene (images, 3D objects, etc.) will be included in the sharpening effect, provided they are above the Post Effect in the Objects Panel (just make sure the post effect is below everything you want sharpened, but not nested inside them). Due to how the Gaussian Blur node works, you'll start to get banding and ghost images if you increase the blur amount too much. If you stick with values of 0.001 for the Pixel Size on the Gaussian Blur node, you should be fine as long as you stay under a Blur Factor of 4.0.

Pro tip: If you start with the "Gauss Blur" post effect and modify that instead of creating the blur from scratch, you can avoid the artifacts you get with high blur strengths.