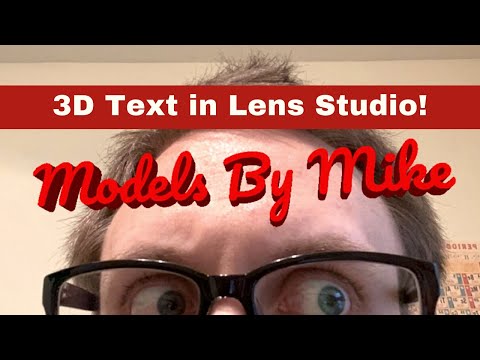 In this tutorial we'll go over how to create 3D text inside of Lens Studio. You can see an example of this by clicking here or by scanning the snapcode below. 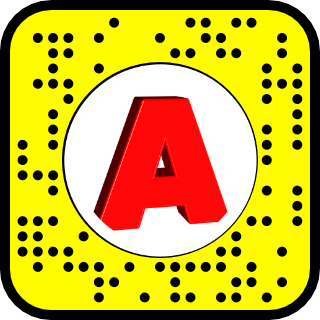 I came across ztext.js the other day and thought it was pretty cool. I noticed that the illusion of depth comes from duplicating the text many times and offsetting the layers. With enough layers, it all runs together and looks continuous. Since Lens Studio doesn't have any actual 3D text, we can use the same technique of multiple layers to fake the effect.

For this effect we are going to start with a blank project. In the Objects Panel, add a Face Image and then delete the 'Look At' component in the Inspector Panel. The Look At component keeps the image facing the camera square-on, but in our case that will mask our eventual 3D effect.

Now let's head on down to the Resources Panel. We need to add the following items:

There are multiple ways to accomplish what we want to do. This method is what works best for me.

To make our script reusable and customizable, we need a few inputs.

Our first order of business will be to create the different layers. We are going to iterate through the number of layers we specify in our script input, copy the Face Image, change the material, and then save it to an array. This block of code will look like the following:

Now that we have our layers created, we need to offset them. For this step we'll take our instances and then offset them by a small amount behind our Face Image. We are also going to make sure we set their scales, but this is only needed for the autoUpdate flag. In our line of code were we shift the z position, you'll notice that we add 1 to the index. This is to make sure our first layer does not lie on top of our original Face Image.

We only need to create our layers once when the lens is turned on. However, while editing our lens, it will be helpful to have our 3D effect update as we move and scale our Face Image. For that, we just add an "UpdateEvent" and call our position function if the flag is enabled. When you are ready to publish your lens, just turn off the autoUpdate flag. If you forget it won't be the end of the world, but depending on how many other scripts you are running you might start noticing an impact. We'll also go ahead and make our function calls to init() and position() when our script runs.

Last, but not least, let's take a look at how to programmatically set the text value on the Text Texture. If we were using a Text Component, we would just have to assign our text to the text property, but since this is a Text Texture, the text property is found inside the control property. For this example I'm going to pull the user's display name from the UserContextSystem and use that for our text value.

Here is our finished script.

Now that our script is ready, let's get it added to our scene!

All you need to do here is set the font and text (if you aren't setting it programmatically) in the Inspector Panel. Leave the color as white because we'll be setting the color on the material.

Now head on up to the Objects Panel and select the Face Image. Set the material to the Main material you created and you should be good to go. If you just see a solid color, try switching the blend mode between Normal and Alpha Test. Once it looks fine you should be good.

You can add the script to whichever Scene Object you like. I like to add mine to the camera. Once you've added your script, fill in the parameters:

At this point you should be seeing your 3D text! If not, make sure there aren't any errors in your script.