Link an object's rotation to a facial expression 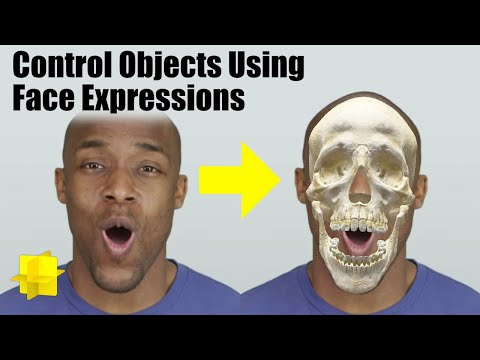 I am starting out with a rigged 3D skull that I imported, so make sure you have some sort of 3D object to work with. It has a single bone that controls the jaw rotation and that is what I want to control via the user's face expressions.

In addition to your 3D object, you will also need to add a Face Mesh in the Objects Panel and also a Script in the Resources Panel. Once you've created your script go ahead and add it to your scene. The Face Mesh comes with a default material that you probably won't want visible in your final lens; leave it for now, we'll come back to it later.

Getting the expression weight

Open up your script for editing and let's get started! This will be a pretty straightforward script. First we need to import the face mesh as a RenderMeshVisual and our target object that we want to rotate.

To access the face expressions, we need to access mesh.control on the face mesh and then grab the weight of the expression we want. The weights range from 0-1 and a full list of the expressions Lens Studio supports can be found here. In my case I want to access the JawOpen weight to control the jaw bone on my skull model. I'm also going to print out the weight to check and make sure it is working. Once you add the following code and save the script, you might notice an error in the Logger. That is because we are missing the script inputs. Select the script in the Objects Panel and choose the face mesh and your target object for the input parameters. Also change "On Awake" to "Frame Updated" for when the script should run. You should now see some values being printed in the Logger Panel (make sure you also choose an "open mouth" preview video).

Let's get our target object rotating. Our plan of action is to change the local rotation because the world rotation is being controlled by the head binding.

First up is to map the 0-1 weight value to the rotation range for our target object. If I select the jaw bone, it's current x rotation is -138 degrees. If I rotate it so the mouth is open, it is about -115 degrees. I'll take the difference of those two values, multiply them by the weight, and then add the minimum value to get the proper mapping. Next I need to map degrees to radians and I'll also grab the original rotation values so that we maintain the existing y and z rotations. Then I'll set the rotation of my target object. It might be a bit easier to follow looking at the below code.

Once you add the above code, your script is finished! Feel free to adjust the rotMin and rotMax values to match your own object and desired preferences. Getting the expression weight is probably the simplest part of the whole process; it's getting the weight mapped to your desired range that might take a little work.

You are also not limited to just rotating objects - you can control positions, scales, and material parameters just to name a few. Happy creating!