Welcome to the first issue of the AR Bootcamp newsletter!

Spark AR recently released v107, and one of the central features is their new UI Shader Code Asset that is "ideally applied to a 2D object like a rectangle." But Review Policy 1.5 states, "Custom controls are allowed if they are integrated with objects that are target or plane-tracked. For example, a world-tracked object may have controls (eg. to change its size or shape) that are attached and move directly with the tracked object. Custom controls that do not track to objects are not allowed." So I'm not sure if the new UI Shader Code stuff means we can create 2D UI elements in Spark or if the review team and product team are engaged in some sort of feud 🤔 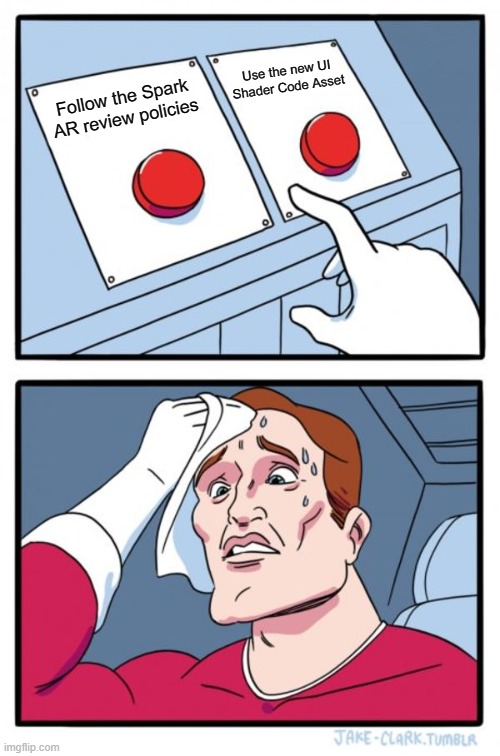 The so-called "Alt" effects still seem to be pretty popular. I'm not as young and hip as the average Snapchat user so I don't know exactly what an "alt" effect is, but from what I can tell it uses a sharpening effect as its base.

Another trend that seems to be taking hold is throwing it back to the early 2000s with grungy and webcam-esque effects. I am definitely seeing these types of lenses on Snapchat, and I think the trend is starting to crop up more on Instagram too. I haven't spent much time on Instagram lately, but I was browsing through their filters and came across one that recreates the Photo Booth effect which I completely forgot existed until I saw the filter. I know I already mentioned not being as young and hip as the average Snapchat user, but I don't think I'm old enough for my middle school and high school days to be showing up as AR lenses and filters.

I'm still a noob at Spark AR, and chain physics is one of those things I've struggled with in it. Lens Studio has a super helpful chain physics script that lets you quickly add lots of wobble to your 3D models (think earrings, hair, tails, etc). Poplar has a tutorial on the subject for Spark AR, but it takes a lot of setup and I wasn't quite pleased with the results, but that could have just been amateur hour on my part. But, the day was saved when I found this tutorial by Roman Pillai which uses a delay patch to recreate the physics. Physically accurate? Not entirely. Easy to setup and use? For sure. Just my cup of tea. The biggest issue I had was making sure the axes for the motion matched the axes of each joint I applied this to, but overall I definitely recommend this method.

Shameless plug here, but I released a new tutorial this week covering how to control the opacity of virtually anything using a slider and a single helper script. The Lens Studio team kindly provides a couple different sliders, but it isn't necessarily straightforward to hook them up to whatever you want. Luckily for you, I did all the difficult, stress-inducing, gray-hair-giving, hard work to make it simple to connect a slider to the alpha channel of images, color corrections, or materials. There's also a bonus feature that lets you control any float parameter for a graph material with a slider.

National Geographic released an Instagram filter to celebrate the landing of Perseverance on Mars. Luke Hurd created the filter and it is pretty neat. Definitely goes to show that AR can be used for a lot more than your typical filter.