Excellent use of a tutorial

This week I am going to give a shoutout to Jonah Cohn for his excellent use of my time warp tutorial. You can give his "Scanner Background" lens a try by clicking that link or by scanning the snapcode below. If you make something cool by following one of my tutorials, send it in and maybe you'll be featured 😎 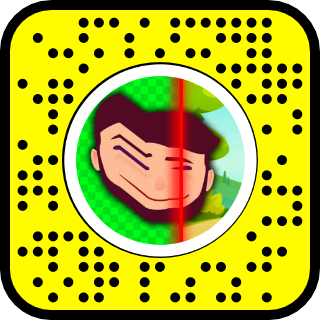 What to create in Spark AR

I think SparkSL is a really good thing to learn if you are serious about creating on Facebook and Instagram. SparkSL is Spark's own version of GLSL. Before you stop reading this newsletter because I started spouting gibberish, let me explain.

Things look the way they do because of how light bounces off of surfaces. In the real world I just turn on the lights and everything magically works (but not magic, science). With computers, someone much smarter than me wrote some code to recreate the process. But since the computers do what we tell them (for now), we can create our own rules. GLSL is a programming language geared towards this sort of thing. You use the code to create a "shader" that then dictates how light interacts with an object. Facebook wanted to bring this power into Spark AR so they created SparkSL, a modified version of GLSL with some extra features.

What to create in Lens Studio

Create lenses that let the user create something or tell a story. What do I mean by that? Snapchat is investing serious money into Spotlight and is still paying out one million dollars per day to video creators. They want people to use it, and I don't think they intend it to solely be the dumping ground for everyone's TikTok videos. Long term they are going to want original content created in Snapchat, and I'm willing to bet money that lenses are going to be a huge part of that.

Color filters look nice, but that's about as far as they go. If you want to get in on the Spotlight game, you need to create lenses that help people tell stories. Screen Scanner Pro is the prime example of this. On TikTok it is known as Time Warp, but it works the same way. A line scans across the screen and freezes time behind it. This simple effect unleashed a countless number of videos featuring people making themselves super wide, super skinny, super short, and super tall just to name a few. It's a simple lens, but it gives the user power to tell a story (however short it may be).

If you need ideas on what sort of lens to create, take a look at TikTok's filters. TikTok is designed for creating short stories and their filters are geared towards that. Don't worry about copying a TikTok filter over to Snapchat because TikTok already copies the occasional Snapchat lens. And you don't have to exactly recreate a TikTok filter - make it your own and add your own personal spin. If you jump on a trend, make sure you are pushing the trend in new directions.

I mentioned earlier that Snapchat is paying out one million dollars per day to video creators. They are not sharing that money with lens creators, but who's to say that won't change? I'd much rather already have lenses being used on Spotlight than be playing catchup later.